The Reign of a Hundred Days

In the vast and ever-fascinating mosaic that forms the history of India, the Mughal period sits like an exquisite miniature, a period piece framed by a mere two centuries in a continuum that spans four thousand years. It is also a reasonably well-documented age; from chronicles of the period we are able to get a sense of the main players not as dry historical figures but as colourful personalities that come to life in unusual, even surreal, events that lend to the Mughal age a quality of high drama.

The Light of the World

It was the year of 1626. The reign of the fourth Mughal Emperor Jahangir was at its apogee. Yet to a degree unknown before or since, Jahangir was king only in name; real power flowed not from him but from within his zenana – the harem – where resided the Shah Begum, the Empress Nur Jahan—Light of the World. Nur Jahan comes to us through the passage of time as one of the most enigmatic and interesting women of her or indeed any other time. Conventional accounts paint her as a schemer, an unscrupulous woman who took advantage of her husband’s increasing addiction to intoxicants to seize and hold power at any cost. It is true that she was a consummate psychologist, a mind-reader who knew exactly what levers to manipulate with whom; and she did this with such effortless ease that power flowed towards her as water down a slope. But later evidence has revealed other facets of this altogether exceptional empress: her genius for trade and administration, her exquisite aesthetic sensibilities, her public munificence and the benevolence she extended toward the poor and downtrodden—especially women. Alexander Dow, a perceptive contemporary observer of the Mughal court, said of her: “The power (of women) it is true, is sometimes exerted in the harem; but, like the virtues of a magnet, it is silent and unperceived. Nur Jahan stood forth in public; she broke through all restraints and custom, and acquired power by her own address, more than by the weakness of Jahangir.” 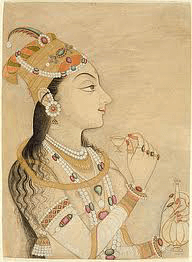 The Pillar of the State

Zamana Beg was a Kabuli whose family had migrated to India and entered the service of Akbar. He was fortunate that from very early on he was attached to the personal staff of Prince Salim, Akbar’s eldest son. The two soon became very close and as the struggle to succeed Akbar began in right earnest, Beg proved his worth to Salim time and again as honest, forthright and completely devoted to his master. There are no physical descriptions of him, but a contemporary portrait shows him to be powerfully built, in keeping with his reputation as a brilliant and ferocious military commander who won the widespread loyalty of his men by treating them “with firmness yet forbearance.”

When Salim finally ascended the throne as the Emperor Jahangir in 1605, he promoted Zamana Beg to Bakshi or master of his private establishment, with the title Mahabat Khan. From then on, Mahabat’s star rose rapidly at court; he became indispensable to the emperor as his chief hatchet man, who invariably handled all of Jahangir’s dirty work, causing the emperor to often refer to him as a “pillar of the state.” 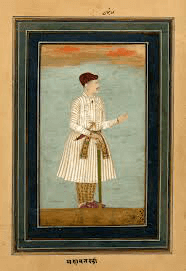 Early on in his reign, Jahangir began to detach himself from state affairs, devoting himself to purely aesthetic pursuits—and increasingly, to wine and opium. Nur Jahan moved swiftly to fill this vacuum. Over the next two years, Mahabat Khan watched Nur Jahan’s rising power over her husband with increasing trepidation. Using his unprecedented personal access to Jahangir, he pleaded with him to reverse this course of action where “such a wise and sensible emperor … should permit a woman to have so great an influence over him.” Unsurprisingly, Nur Jahan on her part began to see Mahabat as a serious obstacle to her hold on power. The struggle between Mahabat and Nur Jahan continued fitfully over several years, a battle on the chessboard of empire in which neither was able to quite upstage the other’s hold on Jahangir’s affections.

By early 1626, Mahabat’s standard was flying high. He had led the armies of Jahangir to a crushing victory in the Deccan against the rebellious Prince Khurram. The imperial forces were nominally under the command of Prince Parviz, Jahangir’s second son, who quickly emerged as a strong contender to succeed the ailing Jahangir—ranged directly against Nur Jahan’s own protégé, the effete Prince Shahryar. The golden age of Nur Jahan was now entering a decidedly uncertain phase.

What followed next is one of the most extraordinary events in Mughal history; one that is often overlooked though it shows up as nothing else the phenomenon that was Nur Jahan.

Typically, the empress decided to strike when she was weakest. In a series of moves calculated to bring Mahabat to his knees, she and her brother Asaf Khan (also a sworn enemy of Mahabat) worked hard upon the king to convince him that Mahabat‘s intentions were treacherous, that he was seeking to undermine Jahangir by advancing his own cause. Obtaining Jahangir’s permission when he was in a wine-induced torpor, Nur Jahan issued a firman in her own name posting Mahabat to Bengal and replacing him with another officer. In an insult designed to further inflame Mahabat (who was famous for his honesty), he was asked to account for the spoils seized during the campaign against Shah Jahan.

Mahabat was mortified at this calculated snub to his loyal years of service to the crown. But he did not immediately rise to the bait. He wrote to the emperor seeking permission to present himself in person at court in Lahore and redeem his honour. Then he gathered to himself a force of around 5000 crack troops and set out for the imperial camp. Jahangir had by then left Lahore and was camped by the Jhelum. Again, Nur Jahan had instructions sent out to Mahabat that he must approach the imperial camp alone—a message that again hurt Mahabat deeply for the distrust of Jahangir that it conveyed. Still he complied, sending ahead his son-in-law as a gesture of good faith and committing himself to appear before the court.

It was now that in her bid to destroy Mahabat , Nur Jahan overreached herself. She had Jahangir arrest the son-in-law and confiscate his property to the crown. This brutal treatment of one of his family members tipped Mahabat Khan into open rebellion. In an added blunder, Asaf Khan had crossed to the other side of the Jhelum with the imperial troops and treasury. Mahabat immediately seized these, posted guards at the crossing bridge and then charged into Jahangir’s camp and made him a virtual prisoner. Nur Jahan barely managed to escape.

Over the next two days a struggle ensued between the remnants of the imperial forces and Mahabat Khan’s own army on the banks of the Jhelum. The battle also saw Nur Jahan at her finest, personally exhorting her troops to “strike boldly forward, so that by your advance the enemy may be repulsed and take to flight.” She set the example by fording the river on her elephant to give battle to the enemy. She also executed a flanking move by sending in a small guerrilla force to try and rescue Jahangir while Mahabat was diverted in combat, a move that almost succeeded.

However, Nur Jahan was not really a match for Mahabat in the battlefield; she and Asaf Khan soon surrendered and the crown was now firmly in Mahabat’s control. Thus began a three month interregnum in Mughal history that would go down as the ‘one hundred day reign’ of Mahabat Khan. In one stroke, the reigning sovereign had been supplanted by his commander-in-chief.

By May 1626, the royals were seemingly resigned to this state of affairs. But this was a cloak, designed to “draw the veil of ignorance over the eyes of Mahabat Khan”. Nur Jahan was at her psychological best, reading Mahabat’s moods, watching him as a leopard its prey. In truth, Mahabat was deeply ambivalent at keeping his long-time master prisoner. His bond to Jahangir had been great and by nature he was intensely loyal. In deference to his nominal sovereign, Mahabat had even allowed Jahangir to retain some Ahadi troops as his personal guard. Nur Jahan knew this, and now began her play. She tested the waters first by instigating the Ahadis to pick a fight with the Rajput soldiers under Mahabat. In the ensuing fracas, Mahabat lost some of his best leaders, but exactly as she had anticipated, he still could not bring himself to take punitive action against the royal family; he was shaken but remained conflicted in what to do next.

Nur Jahan now made her next move. Under her tutelage, Jahangir took up the part of becoming Mahabat’s confidante within the imperial camp. The empress had obviously taught her husband well, for soon Jahangir had wormed his way into his own commander’s confidence, faithfully pretending to relay all of Nur Jahan’s schemings and plots to Mahabat, lulling him into relaxing his guard around the royals.

Using this reduced surveillance to full effect, Nur Jahan used her personal eunuch to secretly mobilize a highly motivated force of Pathan and Sayyid cavalry and mass them to the rear of the royal caravan on the way to Lahore. As they approached the Jhelum, Jahangir sent an abrupt message to Mahabat, effectively informing him that an imperial force now awaited them at the rear, and strongly advising him to move forward “so that the two parties would not clash”.

It is a fundamental axiom in war that one must know one’s enemy. One must also learn from the past. Nur Jahan had done both. She must surely have recalled Bairam Khan, the great soldier-regent who also went up in rebellion against his ward Akbar, only to soon bend knee without so much as drawing sword despite having a loyal army at his command. It does appear that with some men their personal sense of honour and fealty render them psychologically weak in certain crises.

Nur Jahan had read Mahabat and anticipated his reaction perfectly. Mahabat, the encounter with the Ahadis fresh in his mind, and as ambivalent as ever towards Jahangir, complied and went forward. And so it was that Jahangir was soon received by his full court and his own Ahadi and Pathan troops and “so regained his liberty on the banks of the river where he had lost it a few months before.” Outmanoeuvred in terms of troops, from now on Mahabat Khan would be a fugitive, done in by his own self-doubt and a woman’s cleverness.

The reign of a hundred days shows us Nur Jahan at her political best. Never once did she lose her nerve; even when all seemed hopeless, she played the few cards she held masterfully, playing on the weakness of her opponent, using her husband’s hold over him to full advantage, and then striking at exactly the right moment and with total ruthlessness. The next year – 1627 – she would face an opponent who would prove her equal, and this time she would be not be so lucky. That story will follow soon in the pages of this newspaper.